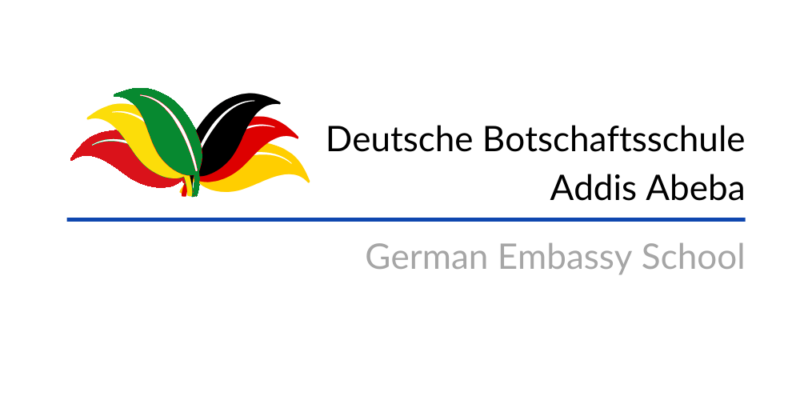 A journey through the history of the German School

Whoever embarks on a journey through the history of the German School Addis Ababa will be amazed at what has happened since the founding of the first school association in 1926. The school has developed from an expert school in the Missionary House into a modern educational institution. Roman Herzog, the then Federal President, broke ground for the school at its current location on 26.01.1996. The German School was first opened in 1955 by the then Emperor Haile Selassie as a meeting school at Amist Kilo. In its best days it had up to 800 pupils, but had to be closed under the DERG regime, was expropriated and forced to move to the grounds of the German Embassy. The communist regime did not allow children of Ethiopian nationality to continue attending classes at the German school. After the political climate changed again, the school moved to its current location and is now a rather small but exciting place to learn and teach!

The school currently offers a place of learning to more than 300 children and young people from kindergarten to the IBDP and is constantly developing. With the construction of the new administration building and the construction of the new classrooms, which started in the school year 2019/20, the German School Addis Ababa is once again setting the course for the future.

We are proud to look back on such a moving school history. The most important milestones of this success story are summarized below. 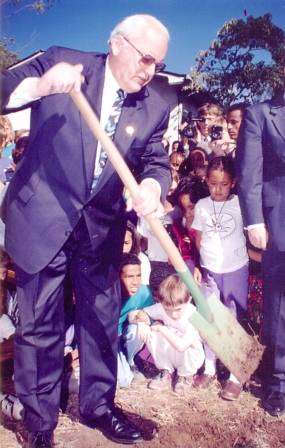 1926
Foundation of the first school association by Hermannsburg missionaries.

Final closure of the school.

1954
Foundation of the second German School Society under the chairmanship of Dr. Wilhelm Winter. Concept as an interdenominational and multinational school.

1955
Transfer of the school property from Emperor Haile Selassie I. to the school association for a period of 50 years at a rent of 1 Eth $. 21.11.1955 Start of teaching in the “Hotel Nizza” as an interim solution until the new school building is completed. (25 pupils, 14 kindergarten children, 2 teachers and 1 educator).

1956
Increase in the number of pupils to 150, mainly through Ethiopian pupils. Establishment of a separate primary school branch with Ethiopian teachers and Amharic as the language of instruction.

1957
Construction and completion (1961) of the new German School with classroom, boarding and kindergarten buildings.

1960
June, first final examination at the end of class 10, establishment of the grammar school class 11 and finally extension to class 13.

1961
On 7.2.1961, the German School in Addis Ababa was recognised by the Conference of Ministers of Education and Cultural Affairs as “the leading German school abroad for the final examination”.

1963
May – first high school graduates complete their school-leaving exams under the chairmanship of Prof. Dr. Assmann. The number of pupils rises to 370.

1964
October Heinrich Lübke holds the topping-out ceremony of the school’s annexes (farm building, dining hall, pantry and kitchen. Laundry and new main building with classrooms for Sections I and II and a gymnasium).

1967
Ceremonial handover of the supplementary buildings on the occasion of the visit of Emperor Haile Selassie. The school is now attended by over 400 students. It has been extended by science rooms, a gymnasium with an assembly hall, a service building and administration. Recognition of the school as a “German school abroad leading to the school leaving examination” by the Conference of Ministers of Education and Cultural Affairs.

1968
Introduction of a specially created Realschulabschlussprüfung, which leads to the acquisition of the German “Mittlere Reife”.

1974
This year the military deposed the emperor after 44 years of sole reign. With the coming to power of the communist regime a drastic decrease in the number of students begins.

1977
The school buildings are violently occupied by soldiers, the inventory confiscated the school is declared “School of Pharmacy”. The staff is denied entry from January 6th, ’78.

1978
Move of the school to the embassy grounds. Approval of the Foreign Office and the Ethiopian Ministry of Foreign Affairs. No permission for Ethiopian students to attend school. On 3.5. 1978 the school receives the name “German Embassy School”.

1979
Recommendation of the Federal Foreign Office to dismantle the upper secondary school.

1986
Offer from the Ethiopian government to provide a new plot of land as compensation.

1989
Land transfer agreement for the new school building. Thus, an area of 21,765m2 near the Kebena River will be leasefree for 50 years to the Federal Republic of Germany. The agreement on cultural cooperation between the German Foreign Office and the Ethiopian government is also concluded, which still forms the basis for the work of the school and the Goethe-Institut today.

1991
Cultural Convention between the Federal Republic of Germany and the People’s Democratic Republic of Ethiopia enters into force. The current school property is left for use and development.

1995
Another building, the Steinhaus, is ceremonially handed over by the embassy. Only now does the German Bundestag decide to allocate DM 7.1 million for the second construction of a German school in Addis Ababa.

2000
After 3 ½ years of construction, the new school buildings were officially inaugurated during a ceremony. In addition to modern classrooms, the school grounds include a large sports and multi-purpose hall, modern laboratories and specialist rooms including computer science with the latest hardware as well as extensive outdoor sports facilities, a school canteen and an experimental school garden.

2005
The 1st Performance & Development Agreement is signed between the DBSAA and the Central Office for Schools Abroad. For the first time, 6 students complete the upper school of the DBSAA with the Community Language International Baccalaureate Diploma (GIB) of the IB organisation in Geneva. The school celebrates its 50th anniversary.

2007
Signing of the MoU (Memorandum of Understanding) between Germany and Ethiopia, thus opening the school to Ethiopian children with a German background.

2008
the first class begins under the MoU. The first homepage of the school appears. After eight years of meritorious work, Mr. Heiko Ernst hands over the school management to Mrs. Monika Biegel.

2011
The school receives the quality seal “Excellent German School Abroad” after a successful inspection by the German Bund-Länder Commission.

2012
The ceremonial opening of the new pavilion for the pre-school group takes place. The kindergarten enjoys steadily growing popularity during this decade.

2013
With the anniversary celebration “50 years 1st Abitur” and a former meeting the alumni work gets a huge boost. One of the first four high school graduates, Gunilla Layer, née Arén, takes part as guest of honour.

2014
The Inspection Office of the IB organisation certifies very good IB implementation and excellent teaching staff. For the first time the examination for the German Language Diploma is held in the 9th grade. With the new school year, two new classrooms are put into operation.

2015
The school is celebrating its 60th anniversary with an anniversary party and an alumni meeting, in which alumni from all over the world take part. The school has 137 students from 14 nations, 85 children are cared for in the kindergarten.
Construction work on the flood protection wall is resumed.

2016
The kindergarten expands its childcare offer by the dwarf group. The offer is for children from the age of 1 year.

2017
Completion of the construction work on the flood protection wall. As part of this work in progress a new sufficiently large sewage treatment plant was also built for the entire school and kindergarten.

2018
Start of construction of the new classrooms behind the teachers’ room and second successful inspection by the German-Bund-Länder Commission with the award: “Excellent German School Abroad”.

2019
Start of construction work for the new administration building.

The headmasters of the German School Addis Ababa since its foundation 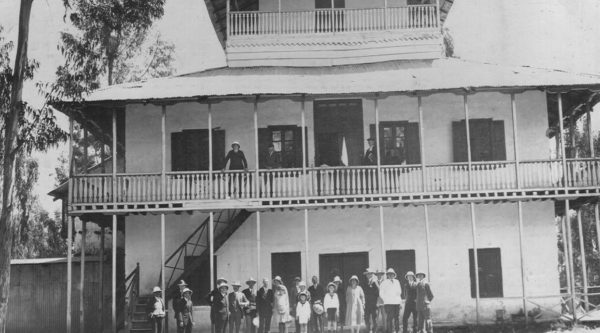 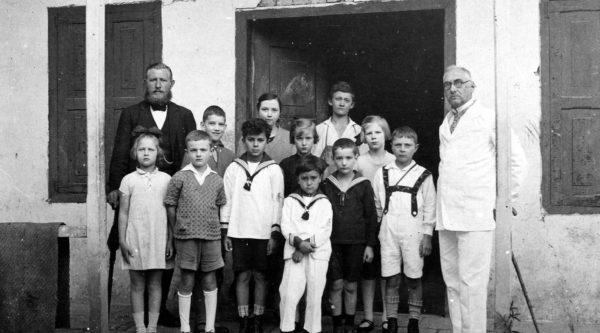 1928 - Start of lessons with teacher Asmus (right) and pastor Bahlburg 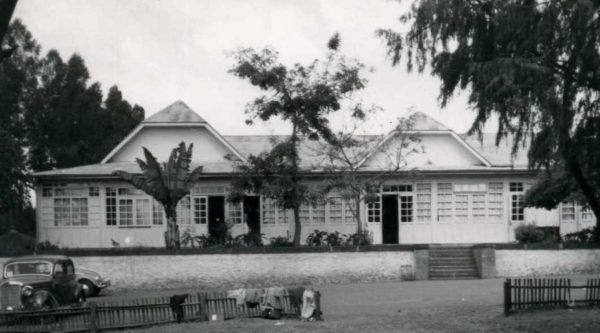 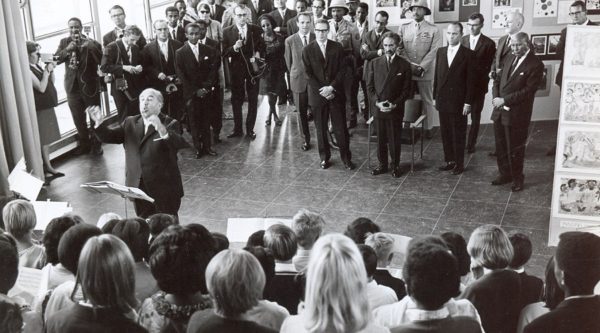 1967 - Emperor Haile Selassie I. visits the new school for the inauguration 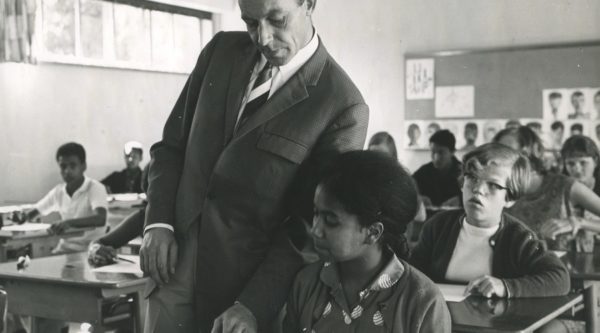 Lessons in the 60s with Karl-Heinz Fiebiger 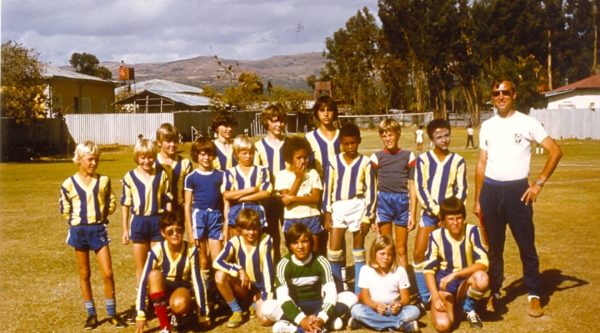 1991 - The current school property is left for use and development 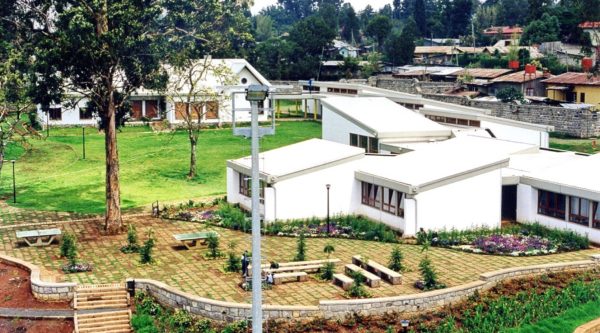